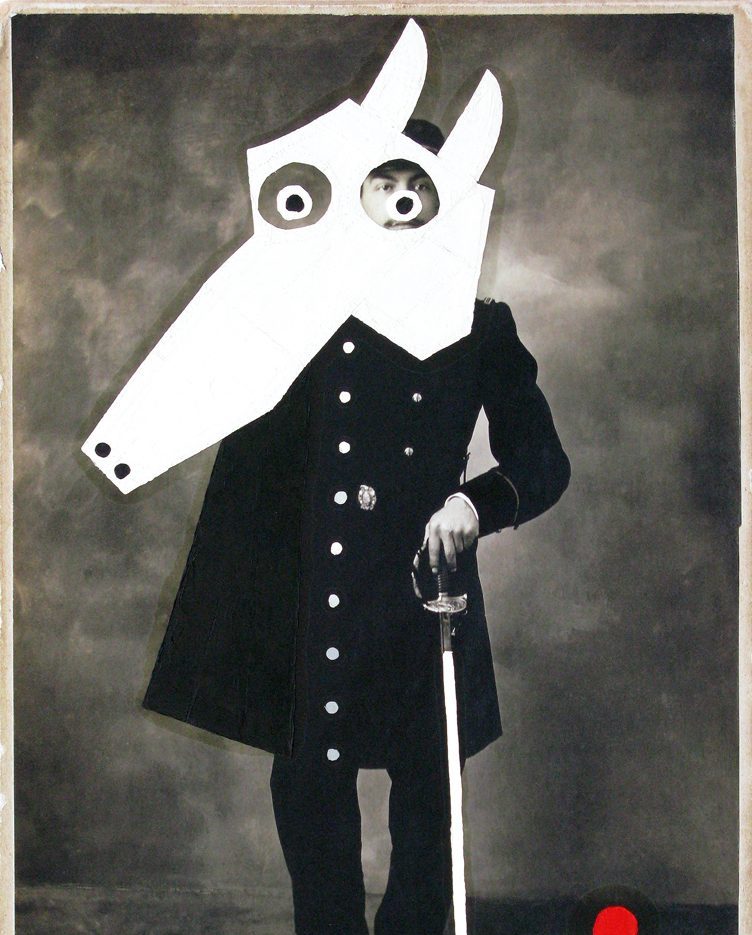 A rose for the little girl, a sword for the squire. When the young rider and the girl entered the photographer’s studio somewhere in the 1930s, they were provided with accessories bestowing them with well-defined social identities. Thus well appareled and dressed, the girl with a rose and the young military with his sword sailed the century from card boxes to photo albums, along with various social typologies – debutantes, graduates, newlyweds, surrounded by their families – until their reunion on this series of collages on portraits by Julio Villani.

The invasion of the paint on the frames – yesteryear so well composed – removes from the models the braces and buttresses lent by the photographer to better endure “their passage to immobility” [1]. Orbited by a lexicon of geometric abstractions, the photographic identities are here endowed with some animosity – even animality – and distanced from what Barthes called, referring to the ottocento portrait, “the deadly layer of the pose” [2]. Instead of the rose, a cluster of circles hangs in balance. In place of the ribbon on the hair, a pair of floppy ears. On the dress, graphics suggest a pair of wings. The girl, once lonely, is now accompanied, surround by a funambulist, an angel, a célibataire [3]. This strategy of destabilization of the pose is repeated over the entire bank of images upon which Villani has leant.

We are confronted with photographs provided with a kinetic intention. In the majority of cases, the artist has worked on three, five, sometimes ten reproductions of the same picture. Intervening several times on the same image, he has managed to imbue them with movement. The illusion of movement is created by the instability of the original repetitive pattern. Supported, nested or fluctuating on the gravitational space of the static models, the geometric elements cause them to roam. “Awakening” the figures from the eternity of their poses, they bestow upon them the nature of an on-going event, the “emphatic truth of gesture”.[4] Contemplated side by side, the painted portraits thus gain the dimension of kinetic constructions. They work like the frames of a film.

Through his cutting, painting and pasting interventions on photographs [5], Villani deflagrates a process of deconstruction of the pose, which was definitely at play in the 30s, when the concept of instantaneous photography began to be applied to portraits. Between the images chosen by the artist, we find snapshots of French social life and of daily scenes in the open air: a couple walking in the fields; a group standing in front of a coffee-shop; children playing on a sandbar. The naturally disorganized distribution of the subjects within the frame reveals that they were not asked to stand for long minutes before the camera, but were captured during a brief pause in their activities.

No great length of time had passed between the gathering of this group on the sidewalk in front of the Parisian cafe and the outlet found by Picasso for his primitivist impulses through his Demoiselles d’Avignon. But the bar-tenders had not even heard of them, taken as they were by the rehabilitation of their shop. Not far away, immersed in the silence of his pose, the young rider with his sword could not imagine that at the same time, somewhere in America, Alexander Calder was producing his first mobile, and Marcel Duchamp, his Optical Disks (1935). Julio Villani’s interventions make us notice the proximity and correspondence of these events. Simultaneously evoking Kinetic art, Cubist masks, Calder’s wire sculptures and Duchamp’s célibataires, he places the rider and the young girl on the tightrope.

5. The interventions are made through the pasting of paper cut-outs covered in oil paint. 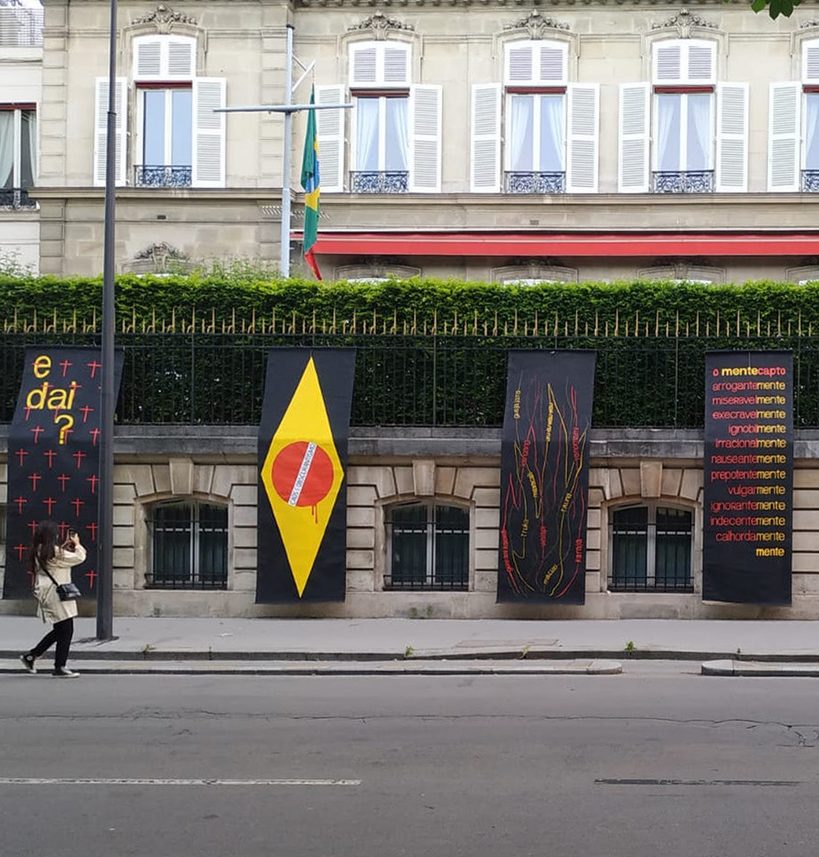 Spurred on by the anti-Bolsonaro campaign Black cloths at the windows, spread on social networks, Julio Villani expressed his grief over the drift of Brazilian politics, but not from the window of his home-studio in Paris, where he has lived for 38 years. The artist hung his black cloths between the windows of the façade of the Brazilian embassy in the French capital.

On each of the seven panels, a message of resentment and indignation. The first reproduces the president’s tirade in the face of the growing number of deaths in the country – “So what?” – against a background of red crosses. On another, a gun fires against the words dignity, justice, respect, memory, integrity. Attacks on indigenous ethnicities are denounced on a third, with the names of threatened groups intermingling with the rising flames. The last one, a white flag, declares: Another Brazil is possible.

Julio Villani develops an artistic research that integrates elements of the constructivist, neo-constructive and popular traditions. Given the sophistication of the realization, the intervention Black Cloths at the window (2020) cannot be described as “vandalism”, as is often said of many political and aesthetic manifestations that have the city as their support or stage. The work enters the history of protest art.