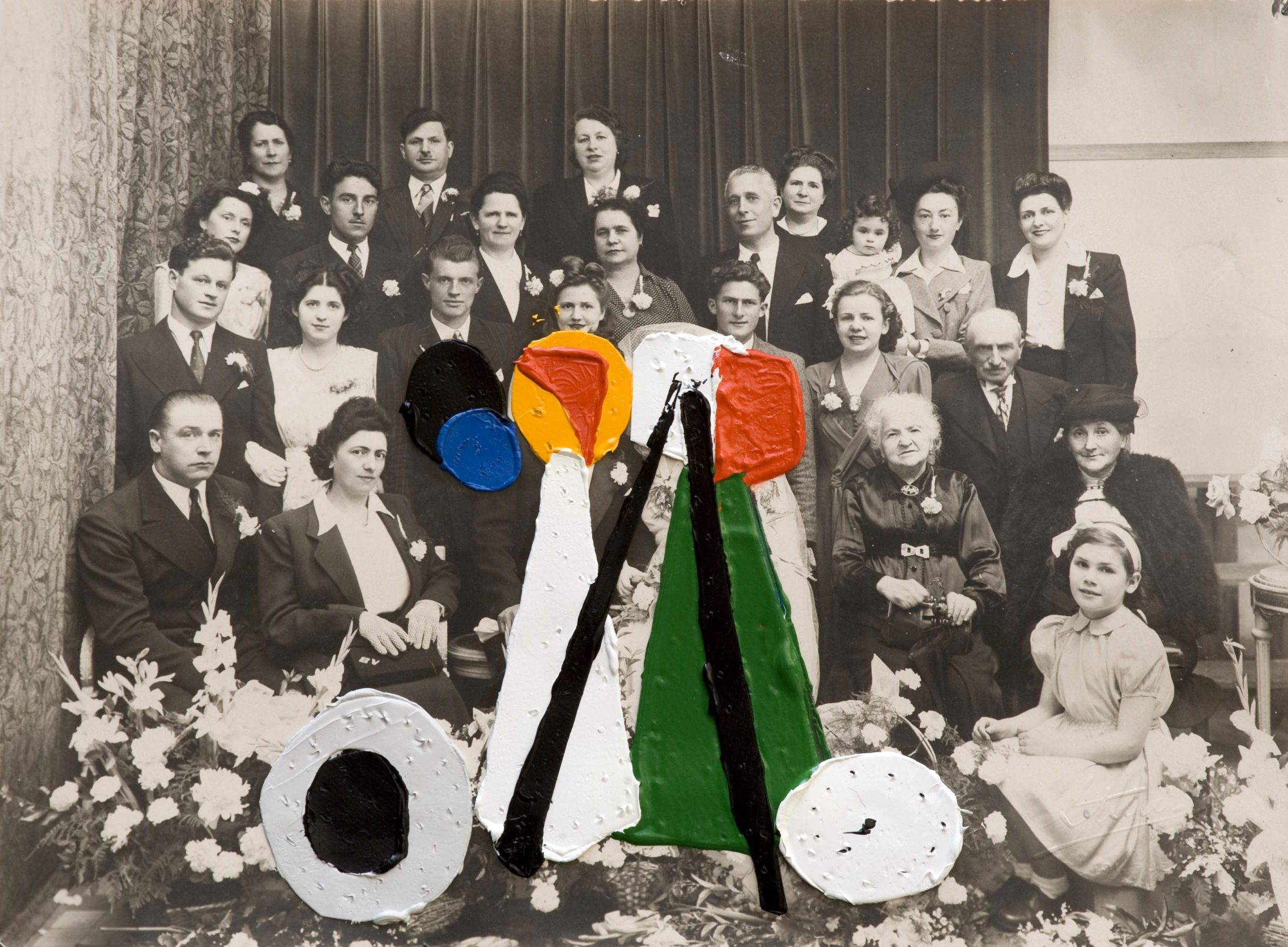 ALL ABOARD | Judicael Lavrador

“All aboard”. This is the title of a work composed of what once was a family photograph – before the artist pasted onto it paper cut-outs covered in oil paint. Who thus climbs and squeezes in aboard? And aboard what, indeed? Our vessel is, chiefly, this book, this substantial sum of works, eclectic in their forms, media and supports, that find themselves classified here in categories, in chapters – the numbers of which (eight: 1+1+1…) must not blur the fact that they all share close ties, entangled as they are on the same thread, only treated differently each time. Collages and found images, abstractions and figurations, color and black and white, games and mobiles, families and animals – here are those who have climbed on board, at their own risk and peril. For the waterline of Julio Villani’s works sways and rocks sometimes dangerously. It swings along according to a dynamic nourished by intuitions and chain reactions, by association of forms, of senses, of words, of geographies, which recall the playful and sassy ways of Dada. 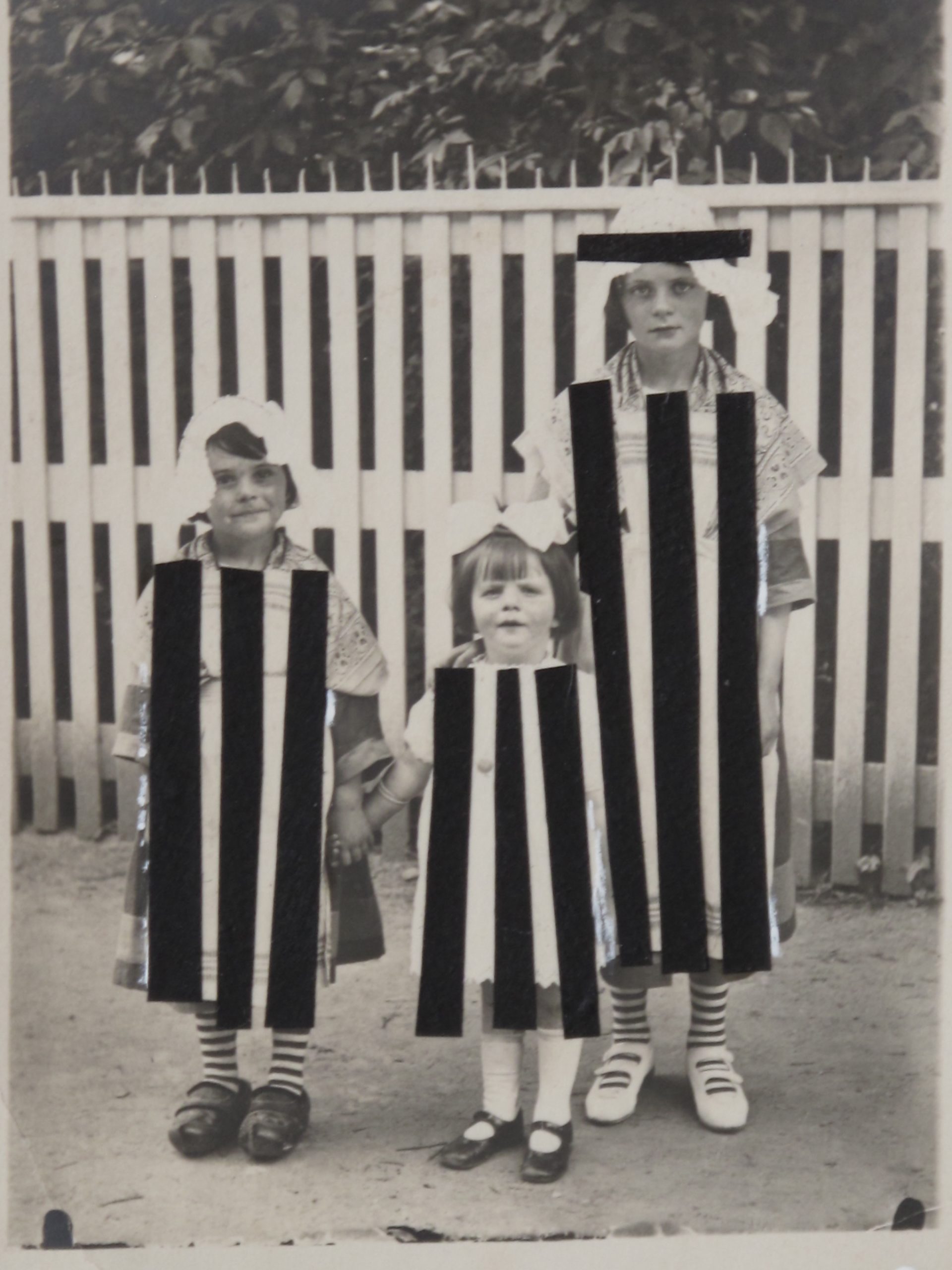 Tinted spots, in a certain order assembled, points, lines, primary colors. The pictorial repertoire looks familiar. It refers, we could say, to a geometric abstraction deriving right out of the early 20th century avant-garde tradition. We could, were this not a false lead. At least a partial lead. For the colored and divagating abstraction cultivated by Villani stems at least as much from a vernacular tradition. No-one can therefore claim to be at the origin of these edgy forms or of these multi-circled compositions, as they can easily be found in popular patterns too; the avant-gardes did little but tame them.

As for Julio Villani, we see how well he adapts the modernistic grid to his images. The kinetic movement regals on the little girls in striped socks standing right in front of the stripes of a board fence. His palette – soft green, sunny yellow, bright red, gipsy white and coal black – contrasts with the black and white of the photos.

Paint here is certainly intrusive, but not an intruder: it injects the breath of life into these devitalized images, and holds intimate dialogues with them. Color is applied in sensual, palpable strokes, through thick, oil-rich over-layers. It so happens that the artist intends the oil of the paint to run from its matrix, forming an aureole on the paper that willingly takes part in the composition. His intervention thus keeps the minimalism of pure geometry at a distance, and anchors the works, rather, in a tangible abstraction: one that trades and exchanges with the images and the grain of their surface, with reality and its medium. 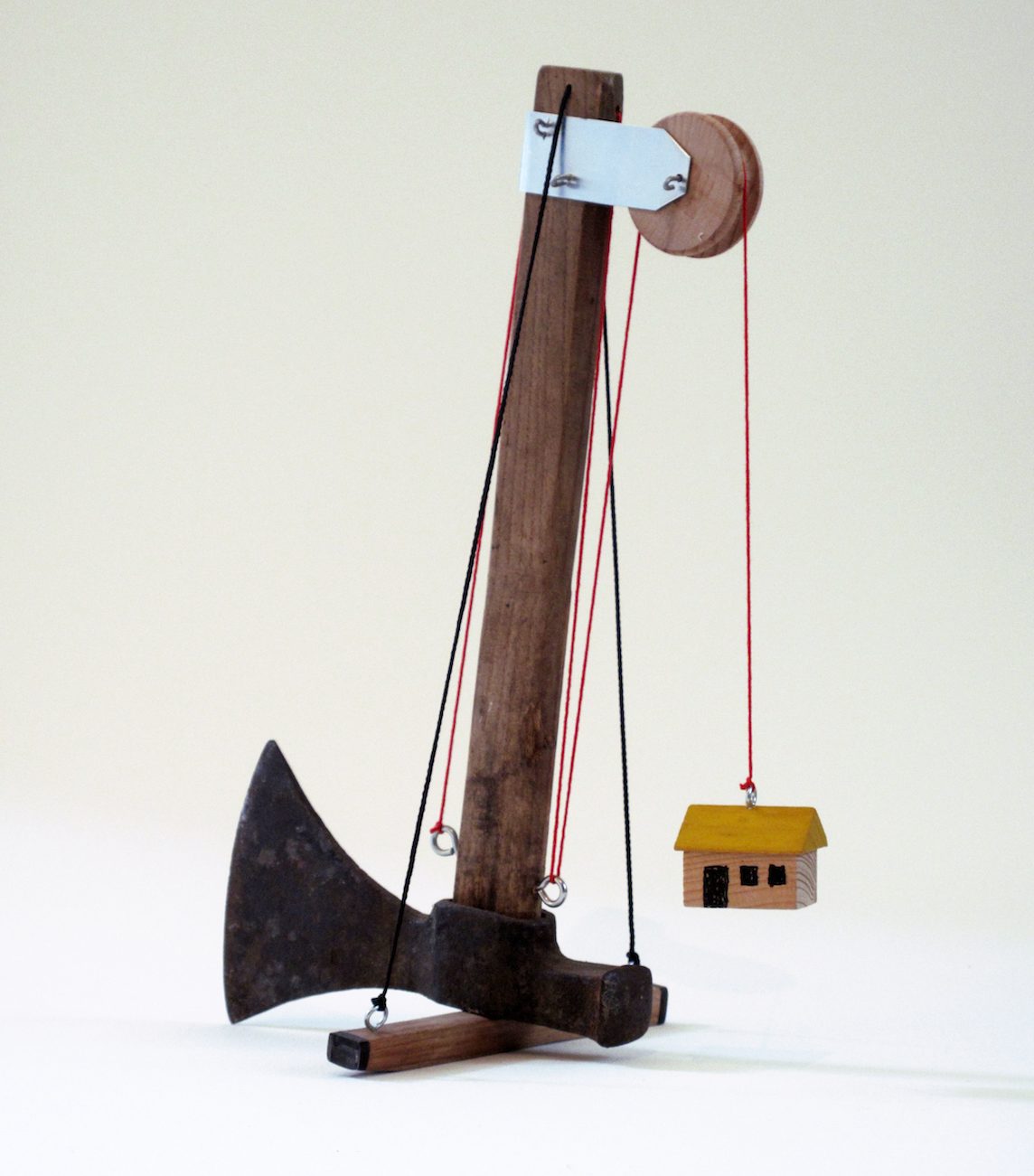 Clack ! The hitch threatens to break. The mallet, to twirl. The ball, to roll down and far  away. The thread of Villani’s work that we must follow or unroll, leads here to small and quite eloquent objects assembled in mobiles, suspended in the air: a thimble, a house (at the tip of a hatchet), a Russian doll or a cup-and-ball game. So many things, the tiny size of which implies that they are inscribed in a broader vision of the world, in its games of balance and continuous tensions. It is the almost cosmic system to which they belong, which is featured here: as stars in a constellation.

For Villani’s Instabilis are at the same time cosmic and domestic sculptures, image of a world where the balance and the existence of every single thing depends on another, where everything is vulnerable, hanging on the fate of some other – which can be an ally or a threat, a weight or a counterweight, that can hold tight or, instead, be ready to let go. The slump is possible at any time.

And then, there is also the domino effect: if a rope slacks, if another tilts, it brings everything down with it. It is the course of things, the butterfly effect on the movement of the world, a suite of shambles. Potentially. This dynamic and macroscopic vision therefore transcends mere plastic considerations: sculpture here is not a static block, massive and cohesive. It is an alliance of materials and forms, disparate but cohesive, which carry and support one another. In other words, at both ends of the thread, on different corners of the Earth, events can connect and hold on to each other. There is no caesura, no worthy border that can truly separate the parts. 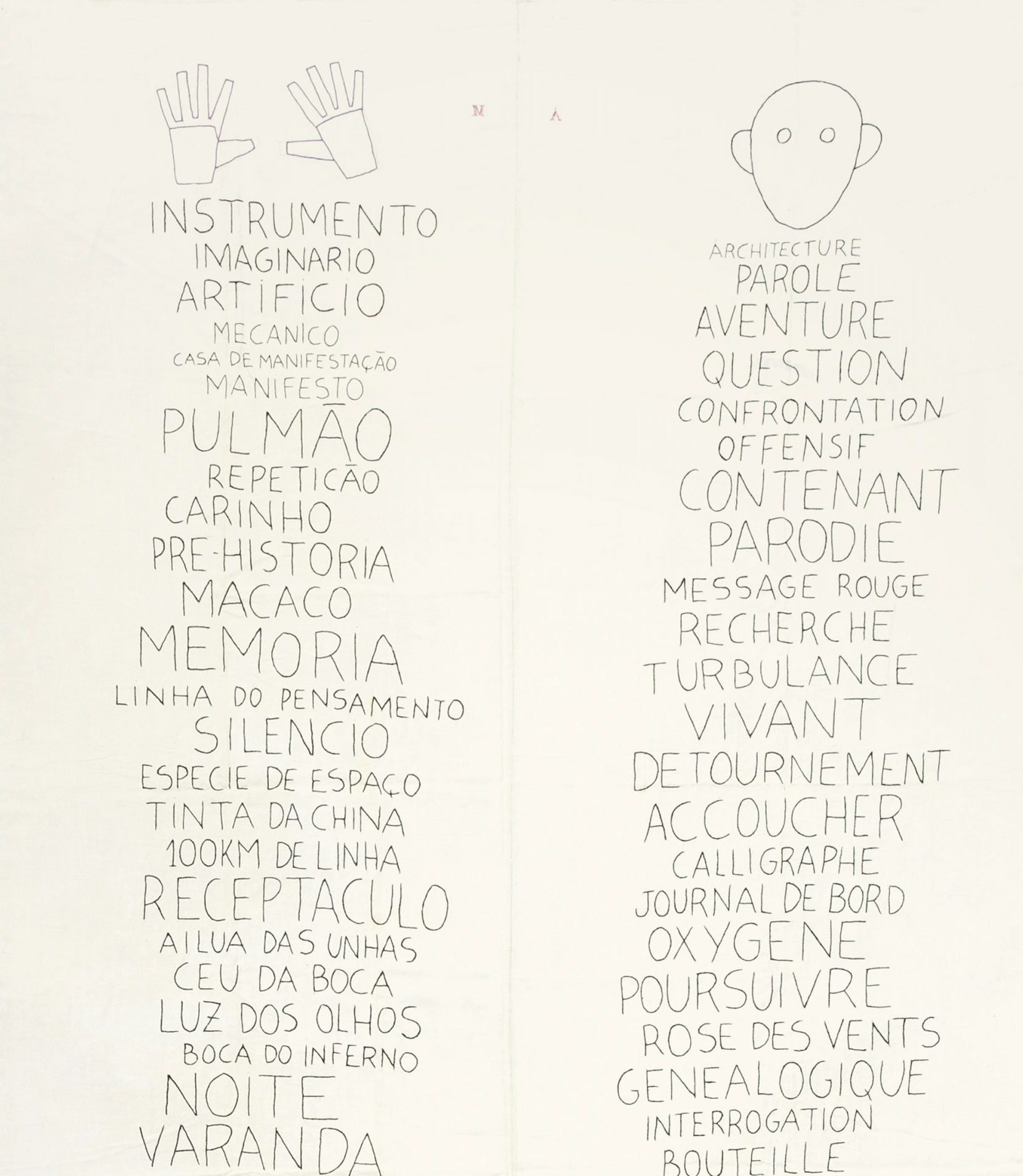 The thread on which many of the sculptures depend, goes on to inscribe here, in the embroideries, on the white bedsheets, graphic lines, written lines and geographical lines. What one needs to know is that these works shuttle between the artist’s studio and the workshops of Brazilian women who follow or interpret his recommendations. He is only an amateur needleworker. He has therefore drawn up a sort of plastic alphabet so that these women can follow the thread of his thought and the inscription of the motif on the fabric. The sheets, bought in Clignancourt flea market, is sent to them with a number of indications, then returned to the artist who rectifies the work, sends them back, before receiving a final version.

The geographical tos-and-fros of the object corresponds to the very gesture of embroidering: one stitches under then over, one tightens, and the thread weaves the weft of the piece. Better still: the motifs themselves are in keeping with this trajectory, which is both clear and wandering.

Arrow diagrams, flow charts, cross-sectional drawings of organisms, celestial maps, topographical surveys, glossaries, panoramic tables of sorts: so many forms of representation that attempt to identify complex systems on a single plane – or that attempt to trace a path through them as if to allow one to better find one’s way.

But the line of conduct is always free and willingly slaloms in the meanders of geographical latitudes, time zones, and lexicon. For language is one of the systems where Julio Villani likes to navigate (by sight) the most. The words, in French and/or Portuguese, respond to each other by sound or semantic association, revealing how the artist thinks and sees the world: playing with words, meanings, forms, swinging between two languages, several latitudes, he moves forward on a thread in the playful and dreamy manner of a tightrope walker. 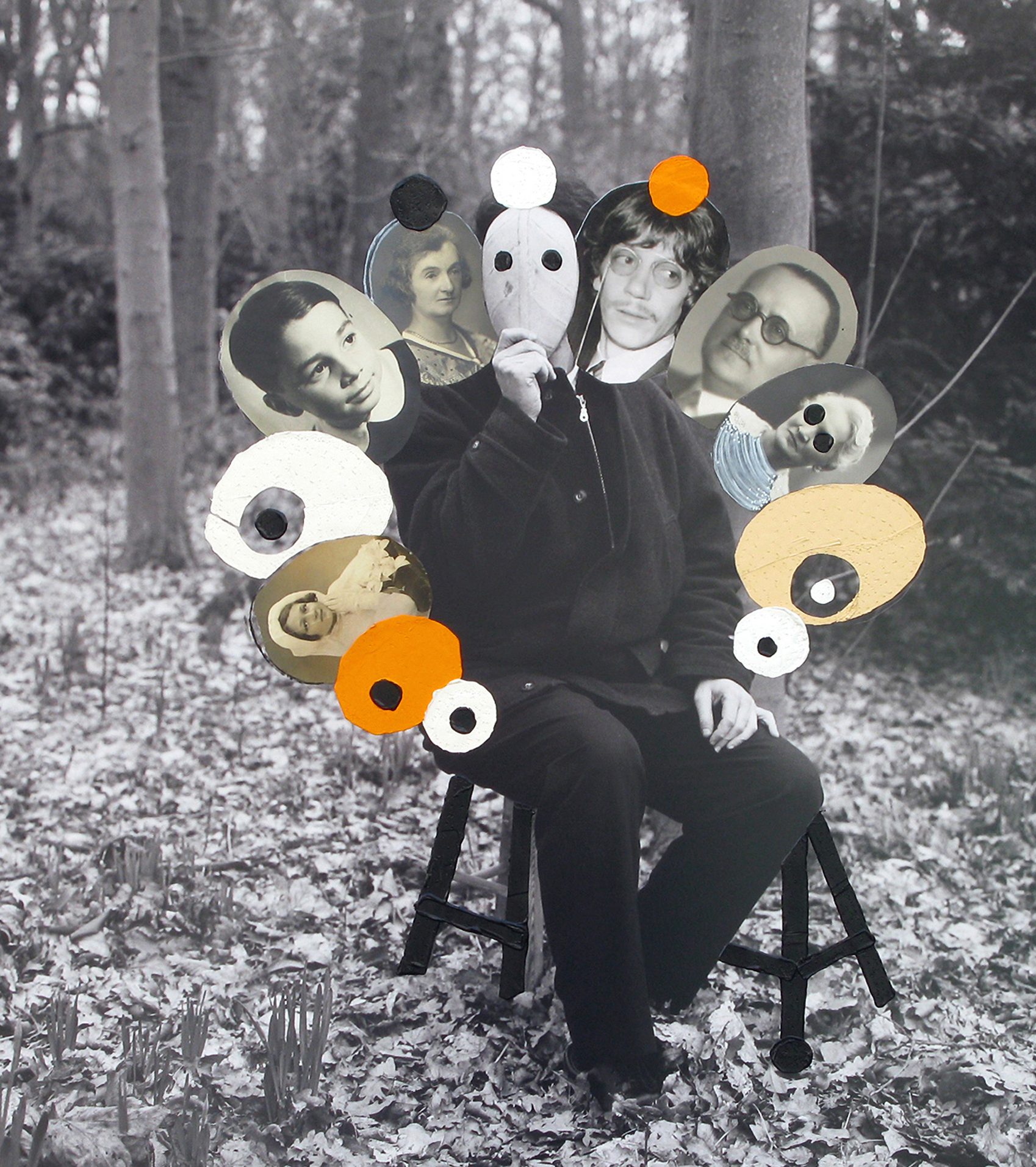 The artist oftentimes promotes the massive and repeated return of certain images by printing the same photograph several times, to better come back to it and its characters, thus offering them a thousand possible existences, a thousand identities, a thousand expressions, a thousand companionships. The painting does not blur the characters (or the landscapes) so much as it does make them up and enhance them, surround and cradle them, accompany or disguise them while also taking the decor into account.

This recurrence of same images with a pictorial treatment different each time is also explained by this: the photographs capture scenes of celebrations, sometimes very posed and a bit solemn; moments when families meet and feast, at the occasion of a wedding, a communion, a baptism, moments of togetherness, which mark everyone’s life. It is as if the colorful cutouts followed the fate and profile of family members year after year, ceremony after ceremony.

The painting tracks this round of the ages, twirling costumes, switching roles of each other of the guests: it invites itself into the frame and brings with it mischievous ghosts, little colored spots that become auratic presences. Painting is obviously intrusive, but not an intruder: it injects a breath of life into these devitalized images and maintains intimate conversations with them. As attested by titles such as Face to face (Tête à tête), what is at work here is a hearty conversation between painting and photography, between abstraction and photographic portraiture, between the artist and his mute models. And these festive images, these celebrations in which strut a parade of patriarchs while the children frolic in the garden, are also those of Painting and its infinite number of possibilities. 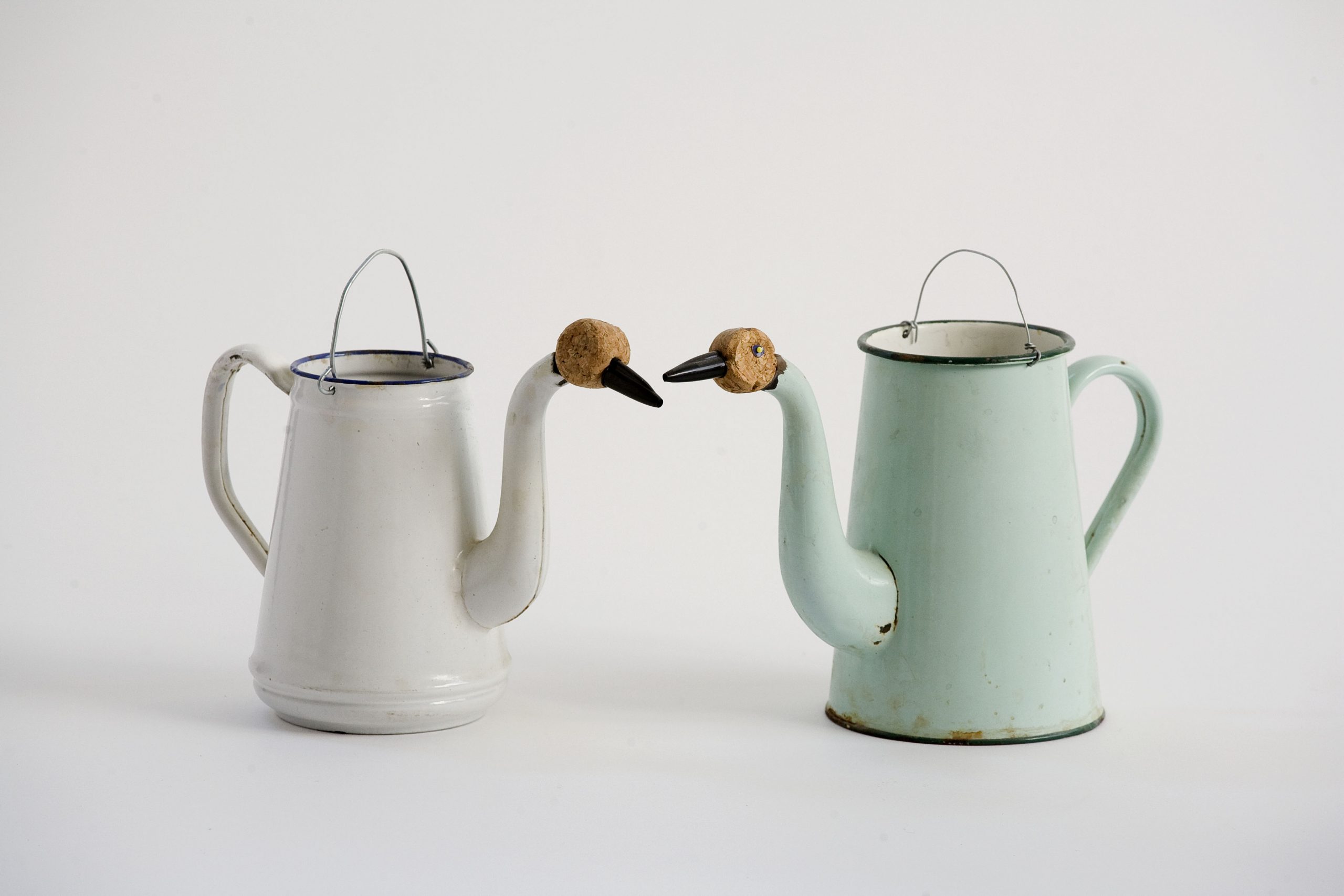 Villani clearly has a manual ability which stems from visual sagacity or, in other words, a form of serendipity: he finds a shape, a pattern, a balance without really looking for it. The objects he uses are collected by – sometimes offered to – the artist, without him knowing what will become of them. They are coincidences, through which the artist always lands on his feet. He folds things to his own measure, and ends up imposing onto them a recognizable style.

Oftentimes, almost accidentally, he finds the trail of animals in everyday objects, where one would never think they could nestle, in the picturesque coupling of a shovel, a mallet, a taut wire, a saucepan, pot, pan, wooden spoon, bent copper pipes, a funnel. From this nameless mishmash assembled with simplicity, suddenly emerges the skeleton, the profile, the expression of some animal, alone or by pairs. A duck and a hummingbird, two waders, a hen and her chick, which, judging by the pose of its mother – handles of pan made winged fists on the hips – is being scolded.

He also finds a shelled turtle in a charcoal shovel, a giraffe, a wildebeest, a cobra, exotic species undomesticated notwithstanding the homy nature of the utensils and materials that embody them. On the contrary: each member of this perky menagerie is caught in mid-flight, in full movement, in full extension, however banal. No chance of finding these animals represented in a sublimely idealized momentum, that kind of pose, for instance, assumed by the hunting dog on the prowl, or   running, slender and leaping. Julio Villani’s bestiary is never embodied in spectacular poise. These are free figures, and not imposed ones, to use terms of figure skating or gymnastics.

The long legs of the wader birds make them look as if balancing and rambling at the end of thin threads. Above all, these sculptures are volatile: sometimes we recognize the object, sometimes the animal. The mating sometimes holds by a thread, and is sometimes sealed more tightly, more secretly, specially when the animal and the original object share one element. Jugs do not give birth to water hens by chance …

Time and again, the title seems to hide a third presence, one that deliberately tangles its paws in the webs of language and words. For language is, for Julio Villani, a plastic, flexible and versatile material, bilingual, Portuguese-French, just as his snake is two-headed. His birds (pássaros, in portuguese) are not made of sieves (passoires, in french) by sheer chance … And if we played along, we could say his Urubu (vulture) looks quite ubuntu.

It, like its mates, has above all passed through the filter of a very specific conception of sculpture. A sculpture anchored in the principles of tension between its components. One that composes bodies and shapes on the sole condition of ostensibly showing which ribs, ligaments and cords hold it together.